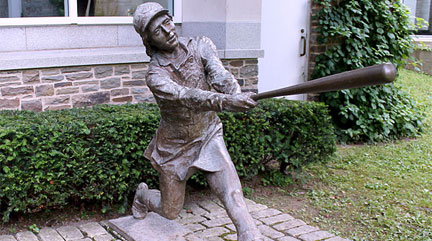 This story traces sometimes-hidden trails leading to a pinnacle of sports recognition.

Amy Irene “Lefty” Applegren played in the All-American Girls Professional Baseball League for nine years. The league, and Applegren’s Rockford Peaches, of A League Of Their Own fame, were recognized in 1988 by the Major League Baseball Hall of Fame.

Applegren began playing ball in Peoria at the age of 11. “Lefty” was a prominent member of the Caterpillar Dieselettes softball team, winning Illinois championships in both 1942 and 1943.

She joined the Rockford Peaches as a left-handed pitcher in 1944.

Applegren threw side-armed rather than full underhand, and compiled 16 win – 15 loss, and 13 win – 11 loss seasons, with Rockford, while completing her final two years in high school. Applegren’s lifetime win-loss record was damaged by a two-year stint with the expansion Muskegon Lassies as officials “balanced” talent around the league.

“Lefty” moved to first base when the league transitioned to overhand pitching in 1948, played for the Peaches again from ‘49 to ‘52, and finished with the South Bend Blue Sox in 1953.

Applegren won three championships with the Rockford Peaches, and was enshrined in the greater Peoria Sports Hall of Fame in 1993.

When Cubs owner Phillip Wrigley kept baseball in view, during the Second World War, by founding the women’s league, players like Amy Irene “Lefty” Applegren entertained millions of fans with a high caliber of play. As a result, American professional sports were forever improved.