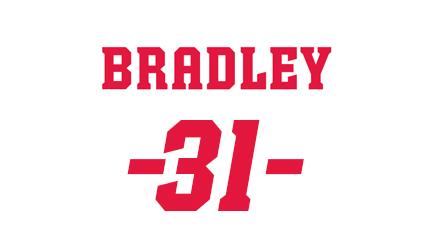 Stories Beyond the Scores
Episode 12: #31

In over a century, the uniform numbers of only seven Bradley University basketball players were retired. Only twice has the same number been retired.

Bradley retired the number 33 in honor of Bob Carney and Hersey Hawkins.

The number 31 was retired in honor of Joe Allen and Chet Walker.

Allen and Walker were not the only great players to wear number 31 at Bradley. Levern Tart and Joe Billy McDade further elevated 31 to distinction.

Three of the four players—Walker, Tart, and McDade—played on Bradley teams that won post-season National Invitational Tournament Championships and were drafted by National Basketball Association Teams.

Levern Tart was selected as the MVP in the 1964 NIT.

Chet “the Jet” Walker, the 4th leading scorer in Bradley Basketball history, had a fabled NBA career culminating in his 2012 induction into the Professional Basketball Hall of Fame.

Allen, Walker, and Tart were chosen as members of the Bradley Team of the 20th Century and were selected for numerous All-American team honors during their college careers.

Numbers worn while earning athletic honors are sometimes meaningless. In other cases, uniform numbers become iconic. Although focusing on their numbers gets our attention, we recall the storied athletic careers long after the uniform number fades from memory.

For Stories Beyond the Scores, I’m Chris Reynolds.