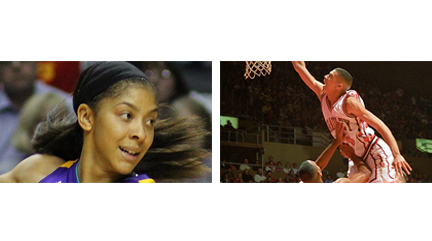 Many pairs of male siblings have played in the NBA.

Pau and Marc Gassol are among more than five dozen brothers-in-baskets.

Only four brother and sister pairs have played in the NBA and the Women’s Professional Basketball Leagues—a select group.

The Meyers, Ann and Dave; the Parkers, Candace and Anthony; as well as Ime and Mfon Udoka and Rudy and Marta Fernandez.

However, Marta Fernandez played one season with the LA Sparks and Mfon Udoka played in only three Detroit Shock games.

The Meyers and Parkers feature the female side of the equation eclipsing their brothers.

Ann’s brother, Dave, distinguished himself playing for the Milwaukee Bucks.

Dave retired, after only four seasons, to concentrate on family and faith.

In 2008, Candace Parker was the first player to win the WNBA’s Rookie of the Year and Most Valuable Player Awards in the same season. Twice voted league MVP and six times All-WNBA, Candace was also named MVP of an All-Star Game and of a championship Finals series.

Few siblings are able to match sports skills with their professional brothers or sisters. Those that do, remind us that sibling rivalry can sometimes lead to excellence in sports and life achievements.

“List of Brothers who have Played in NBA.” allaboutbasketball.us