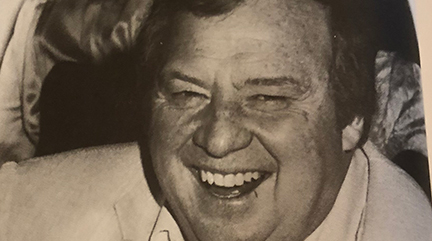 [Photo of Elliott, provided by family]

This story details the athletic facets of a life not usually associated with baseball diamonds, basketball courts, and football fields.

Comedian Royce Elliott was known, throughout a long and storied career on stage and radio, as “America’s Funniest Clean Comedian.”

It’s likely that Royce learned a lot about putting a smile on both wins and losses during his decades-long athletic career.

Royce was a three-sport standout for the Peoria Woodruff High School Warriors. Star-level play as a football running back, basketball guard, and a baseball centerfielder led to multiple college opportunities.

Elliott began his college career playing football at Bradley University, and then transferred to Western Illinois in order to play basketball and baseball as a freshman.

Over the course of a 20-year Sunday Morning Baseball League and fast pitch softball career, the man who became a short and round comic wowed sports fans with his speed and cunning. Royce, through his local philanthropy, “Elliott’s Jesters,” sponsored fast pitch softball, park district men’s basketball, and youth track teams. He coached Salvation Army Biddy Basketball and teams in the West Peoria Little League.

Elliott even branched into weight lifting before that activity became the fashion in sports training.

He trained the likes of the NFL’s Mike LaHood and Canadian Football’s Al Shipman at “Stubby’s Muscle Factory.”

As might be expected, Royce’s athletic influences extended to his family. Two of his sons, Tye and Brett, played college baseball, and one grandson, Mitchell, played both in college and independent league pro baseball.

Show business is competitive. So is life. Royce Elliott worked and played hard to help others to see the “light side of the road.” And that’s no joke.