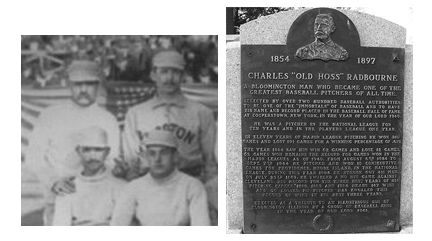 This is the story of two Major League Baseball records that will never be broken and a notable image in American journalistic history.

Charles “Old Hoss” Radbourn was 1 when his family moved to Bloomington, Illinois.

At the age of 24, “Hoss” joined the Peoria Reds, an early barnstorming team and he later pitched in the Major Leagues between 1881 and 1891. His career featured two seasons, and two records, that will stand forever.

In order to appreciate Hoss’ exploits, compare these facts:

For example, in 2017, pitching for Cleveland, Cory Kluber led the majors with 5 complete games. In 1884 Old Hoss Radbourn completed 73 of the 75 games he started.

The next season, 1884, was the first year that baseball legalized overhand pitching.

And the historic journalistic image? In 1886, Old Hoss became the first public figure to be photographed—extending his middle finger to the camera.

After retiring from baseball, Radbourn returned to Bloomington, where he owned a billiard parlor and saloon and died in 1897.

Most baseball records were made to be broken. Even records that seem out of reach may be threatened someday.

But no pitcher will ever again win 59 or complete 73 games in a season.