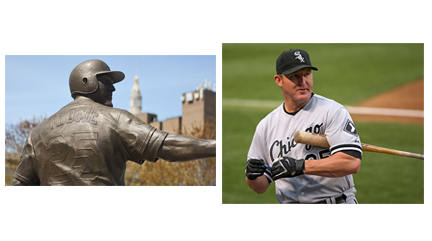 Three players from the 1989 Major League Baseball draft are now in the Hall of Fame.

Frank Thomas was drafted in the first round; Jeff Bagwell in the fourth.

To say that sixteenth round draftee Jim Thome was lightly regarded is an understatement.

The Cleveland Indians choosing him as the 331st player put Thome in the top third of the draft, but well under the radar.

Thome was not drafted at all after playing at Bartonville’s Limestone High School.

So instead of pro ball, Jim played one season of junior college baseball at ICC in East Peoria.

It’s no wonder that Thome received little attention: While fourteen players in the Hall of Fame were born in Illinois, only Jim Thome was born and raised in Central Illinois.

Thome played basketball and baseball in high school, and toiled in the family shadow of his older brother, Chuck Thome, Jr. Jim notes that his family keeps his high-profile career and achievements in perspective. He says, “If I start to get a big head, I have a lot of family and friends back home who know how to knock me down to size—they remind me who I am.”

Thome comes from a line of successful athletes: Caterpillar Incorporated hired his grandmother primarily due to her contributions to their women’s softball team.

His aunt, Carolyne Thome Hart, is in the Women’s Softball Hall of Fame.

Thome often credits his Peoria upbringing and roots for his success. The day he learned of his first ballot election to the Hall of Fame he said: “I’m proud that I grew up where I did. Peoria is a special place … every Midwest kid can dream of a day like this, and I’m living it today.”

“Thome shows the power of Peoria Indian: Third baseman’s rural roots are apparent in his blue-collar work ethic and his ability to hit the ball a country mile.” Terry Pluto, Baltimore Sun. October 1, 1996.