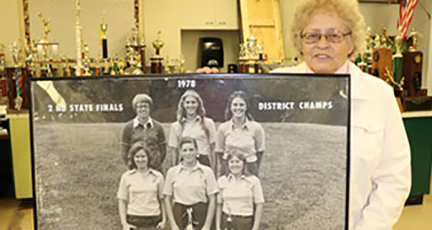 Jugglers use balance to do many things at once. This story shows that sports leaders often concentrate on many things.

From 1968 through 1975, Mickey Schallau played third base for the Pekin Lettes, this country’s longest-standing Amateur Softball Association squad.

In 1973, Mickey started the girls’ sports program at Peoria’s Spalding & Academy of Our Lady High Schools. This pioneering work began one year after Title IX went into effect: teaching golf skills and leading girls in competitive sports was uncharted territory.

Schallau’s career was not limited to coaching golf. During her years coaching high school sports, she also taught physical education, drivers’ education, and served as Assistant Director of Athletics, while also teaching courses for the Peoria Park District.

The 1978 Academy of Our Lady golfing girls took 3rd place in state golf competition and Schallau’s 1979 team finished 2nd. Both squads are in the Peoria Area Sports Hall of Fame.

In 1989, Mickey Schallau became the first female golf coach at Bradley University. She served as the Women’s golf coach from 1989 through 1996 while also working in Bradley’s Sports Information office. During that stint, Schallau remained head coach of the boy’s high school golf team at Spalding.

After Spalding, AOL, and Bergan morphed into Peoria Notre Dame, Schallau’s boy’s golf squad was state runner-up in 2003 and won a third-place trophy in 2007.

Schallau continued her work in golf as Head Coach of the Irish girls’ team.

Until next time, for Stories Beyond the Scores, I’m Chris Reynolds