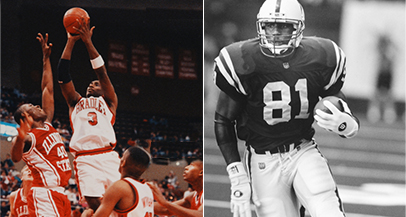 Michael Jordan showed the difficulty of returning to a sport, baseball, that he put aside as a basketball superstar. This demonstrates the extraordinary nature of Marcus Pollard’s accomplishments. After two outstanding basketball seasons at Seward County Community College, Pollard starred, for two years, on the Bradley University basketball team, including a 23-8 season with an appearance in the NIT his senior year.

Pollard then had an NFL career spanning 192 games across 14 seasons with 131 starts, 349 receptions, 40 touchdowns, and a post-retirement stint as the Jacksonville Jaguars Director of Player Development all without playing college football. Pollard’s excellence was recognized in 2017 with an induction into the Missouri Valley Conference Hall of Fame.

Athletic proficiency requires dedication and focus. Athletes with the extraordinary ability to excel in more than one sport earn our singular attention.