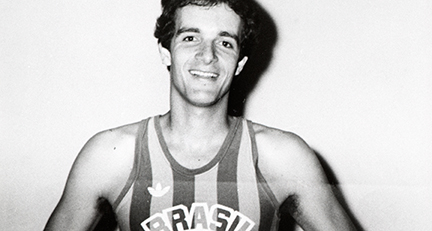 Marcel de Souza averaged 14 points and 4 rebounds per game for the Bradley Braves in the 1975–76 season. Then, the Brazilian returned to his native country to enroll in pre-med school and play for his national team.

de Souza, now a radiologist and family doctor in a São Paulo suburb, remains one of the most awarded figures in Bradley Basketball history.

As a member of the Brazilian national team from 1973 to 1992, Marcel appeared in the Olympic Games of 1980, 84, 88, and 92, as well as five years each of World Championship games, Pan-American games, and the South American championship series.

Most memorably, the Brazilians led by de Souza and legend Oscar Schmidt, won gold by defeating the American team in the 1987 Pan-American games.

de Souza was the head coach of European basketball teams from 1994 through 2010 earning entry into the EuroBasket Hall of Fame as a coach.

De Souza was inducted into the Bradley Athletics Hall of Fame on Jan. 12, 1985, and was selected by his fellow citizens as the leadoff runner to carry the Olympic torch through the streets of Rio de Janeiro in 2016.

While “out of sight out of mind” may seem the rule of thumb as former players fade out of view, Marcel de Souza’s legacy burns bright on the Bradley Hilltop.