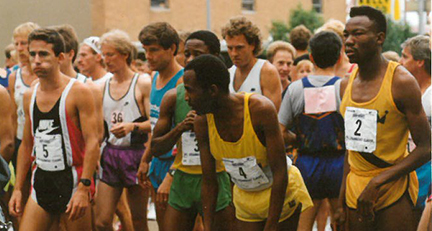 This story illustrates that, in sports, amazing things happen even in the most unlikely places.

South African athletes were unable to compete in the Olympics after the 1960 Rome games due to apartheid policies. Further, the UN and the British Commonwealth imposed sports bans on South Africa in 1977, virtually forbidding nations to allow South Africans to compete internationally.

Satisfied that South Africa was committed to abolishing discrimination in sports, the International Olympic Committee lifted its 21-year ban in July 1991, before the ‘92 Olympic Games in Barcelona.

However, Spain cannot claim the honor of hosting the first black South African athletes after the ban.

The three were joined in Peoria by ex-pat-South African Mark Plaatjes, who gained U.S. asylum in 1988 and won the 1991 LA Marathon. In 1993, Mark became a U.S. citizen and won the marathon at the World Championships in Stuttgart. Plaatjes is an inductee in the Steamboat Classic Hall of Fame.

Equal opportunity in sports knows no geographic boundaries. Organizers of the 1992 Steamboat Classic reached out and embraced four of the most important athletes in the world.

Caption: Left to right: Xolile Yawa (#3); Matthews Motshwarateu (#4); and Meshack Mogotsi (#2) prepare for the start of the 1992 Steamboat Classic.