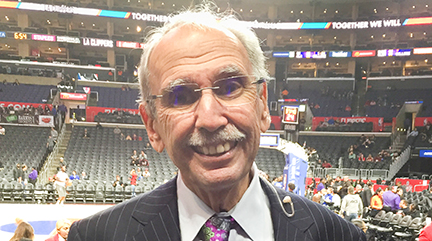 This is a story about basketball broadcasters, and following in the footsteps of professionals you admire. And in the end, it’s about building your own legacy.

Growing up in Peoria Illinois, Ralph Lawler spent many nights listening to Chick Hearn, who was then the radio voice of the Bradley Braves.

Lawler played basketball through high school and once played in a state basketball tournament with Chick Hearn at the mic. Lawler says “I almost dropped and said ‘did you say Ralph Lawler?’ That was just so cool.” for Ralph, Chick was an inspiration long before anyone knew Hearn as the Voice of the Lakers.

Lawler suffered through many losing seasons with the Clippers, first in San Diego, and then in Los Angeles. For two decades, the Clippers generally lost three times as many games as they won. But even during the darkest Clipper years, Ralph Lawler stayed faithful to his craft and now enjoys the rewards of calling many more wins than losses. Lawler says “now we’re having so much fun, and with the new ownership, the new management, it is so different than it used to be. They make it very difficult to want to leave this club.”

After thirty-eight years as the Voice of the Clippers, Lawler is in three Halls of Fame, has won numerous Emmy and Golden Mic awards, and is the recipient of his own star on the Hollywood Walk of Fame.

Ralph Lawler no longer toils in anyone’s shadow. He has built a career that places him at the very pinnacle of the sports broadcasting industry.