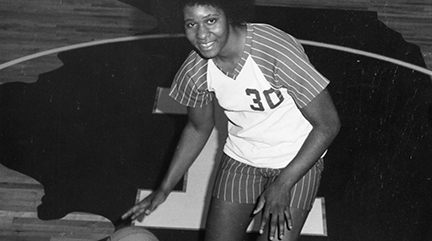 This story traces the start of a legacy in women’s sports.

Ann Meyers was 21 years old, and a two-time All-American at UCLA by the time of the games. Nancy Lieberman, 19, had not yet begun her award-winning playing career Old Dominion.

Charlotte Lewis was a 20-year-old college sophomore-to-be, playing at Illinois State. Lewis made the Olympic team in just her third year of organized basketball. She was unable to play high school basketball because the Peoria public schools did not yet offer women’s varsity basketball. Lewis’ college coach, ISU legend Jill Hutchinson, notes that Lewis “learned her basketball on the playgrounds of Peoria, playing with the guys.” Hutchinson called 6’ 2” Lewis a kind and physically awesome gentle giant.

Ann Meyers went on to become a four-time college All-American, the first woman to sign an NBA contract, and the first player drafted by the Women’s Professional Basketball League.

Nancy Lieberman, a three-time All-American, twice won national Player of the Year,
and at the age of 39, was the oldest player in the WNBA’s inaugural season. Lieberman is also the first woman assistant coach in NBA history.

Charlotte Lewis, who passed away in 2007, has been inducted into both the ISU and Missouri Valley Conference Halls of Fame.

Basketball at the 1976 Summer Olympics