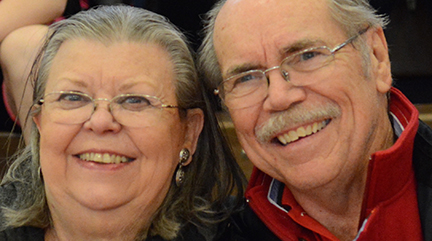 This is the story of a successful quest for the essence of sports.

Dave Kindred is the recipient of sports journalism’s highest honor, the Red Smith Award.
Kindred is a member of the National Sportscasters and Sportswriters Association Hall of Fame. The PGA of America awarded Dave its Lifetime Achievement in Journalism Award.
Kindred is the author of nine books and has written and reported for the Washington Post, Atlanta Journal-Constitution, Sporting News, Golf Digest and many other publications.

Kindred’s career is far enough along to hang up pen and pad without regrets. Instead he pursues his passion for pure sports in the bleachers of the Morton Illinois girls high school basketball team.

Kindred says “I like that the games are one hour, fifteen minutes, there’s no Katy Perry at halftime, no commercials. That’s all I’ve wanted from every sporting event I’ve ever covered. The girls just give you the game.”

Kindred covers the Potters with the same professional conviction that earned him the highest accolades in his business.

He says “you get so caught up in the hoopla of a major sports event, you forget what matters . . . If you pay attention, you’ll see something you’ve never seen before. If you work at it, you can make a girls’ high school basketball game as riveting as the Super Bowl.”

Kindred’s professional journey led him to the essence of sports as he watches high school girls give their all on the court. Dave Kindred has come full circle, and he loves every minute of it.

Photo of Cheryl and Dave Kindred: by, and with permission, Don Pyles, 2013.