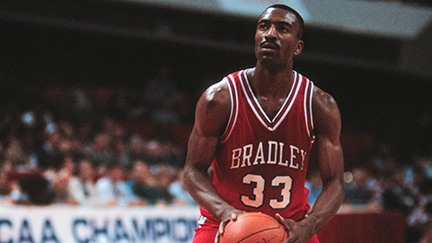 Stories Beyond the Scores
Episode 8: Perseverance

This is a story about perseverance.

Michael Jordan is held by many as the NBA’s greatest player.

Hersey Hawkins, the 1988 AP, UPI, and Sporting News College Player of the Year, is Bradley University’s all-time leading scorer and played thirteen years in the NBA.

James Donaldson is Washington State University’s all-time leader in blocked shots, is in the WSU Athletic Hall of Fame, and played 16 in the NBA.

These players persevered in the face of adversity.

As a fifteen-year-old high school sophomore, Michael Jordan was cut from the varsity basketball team.

Seven-foot two-inch James Donaldson was so unpolished that his coach, George Raveling, hired the WSU track coach to teach Donaldson proper running form on the court.

Raised in the projects in Chicago, Kirby Puckett went to work on a Ford Motors assembly line after not receiving college scholarship offers. Later, after one year of baseball at Bradley University and another at Triton College, the Minnesota Twins selected Puckett in the draft’s 1st round.

Born and raised in the Dominican Republic, Albert Pujols was drafted in the 13th round. 401 players were chosen before the future first ballot Hall of Famer.

Athletes facing adversity have two choices: They can quit or they can continue working toward excellence. Perseverance pays off in self-respect and—sometimes—acclaimed achievements.