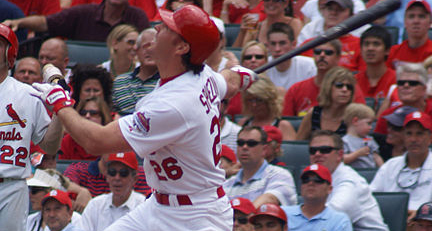 Athletes face the thrill of victory and the agony of defeat with each competition.

Today we look at this challenge as it moves from fields of play to the game of life.

The Giants were set to win the two thousand and two World Series.  The Angels were poised for elimination in game six trailing five-to nothing in the seventh inning.  That’s when Scott Spiezio launched a three-run home run that propelled the Angels to a come-from-behind victory.  The Halos won the World Series the next day.

Spiezio enjoyed hero’s glory as the celebrity of home-town Morris, Illinois, a rural community nestled along the east-west fork of the Illinois River just off Interstate eighty.  Scott starred for both Morris High, and the University of Illinois. Spezio then followed his Dad, Ed’s, footsteps by playing in the big leagues.  Scott’s eleven-year major league career included championships with both the Angels and the Cardinals.

Scott also played for big crowds under bright lights while serving as front man in a series of heavy-metal bands.  Brushes with the law followed as Scott’s baseball career faded.  Charges of assault, domestic battery, vandalism, and rumors of drug abuse circulated.

Spiezio described his difficulty leaving the spotlight.  “The transition has been tough for me because I’ve gone from having that adrenaline of playing in front of TV cameras…to living in the middle of sixty acres.  When I’m with the kids, it’s one thing, but when I’m by myself, I’m like, ‘What do I do?’”

Translating the competitive spirit to everyday life presents both problems and opportunities after the lights dim, and the uniforms are cleaned and stored.  An athlete’s response measures their greatness.